I got a new bike. The last time I had a new bike was when my parents bought me one in 1978. Normally I'd just pick up a second hand clunker on the cheap. But the UK Govt offer a scheme where your employer can buy a bike VAT free then hire it out to you through your gross salary until the principle is paid off then sell it to you for 'fair market value' which winds up being 5% of the original purchase price. Cool! So with the NI contributions, income tax and VAT taken off you get around 45% off the retail price.

But what happens when you buy it off a wholesaler? Heh! Another 30% off. So I got all wound up reading about the KHS XC604 and have been itching to get it for the last month. It came in the post today and we're expecting to head for the hills on Saturday to roll our wheels over rolling hills….

Here's a snapshot of the bike:

We'll be doing something like this again (sorry about the poor quality)….

One fine day a few weeks ago Freddie's cousins in New Zealand, the Stillz Boyz Zach Jamie and Duncan, went to the Auckland Botanical Gardens. They had lots of fun seeing all the different trees, plants and flowers. But what they found especially interesting was the abundant insect life that appeared to be enjoying itself silly amongst the flora.

You can see them on the right as, despite those innocent looks, they scheme and plot all sorts of crazy insect gathering plans in the red circle. END_OF_DOCUMENT_TOKEN_TO_BE_REPLACED

Over the recent Easter break Mary took the family for a drive to the Lake District and back via the Peak District for a couple of nights. Here's a map of where we wound up, and where we went whilst there – do navigate around it to get your bearings: END_OF_DOCUMENT_TOKEN_TO_BE_REPLACED 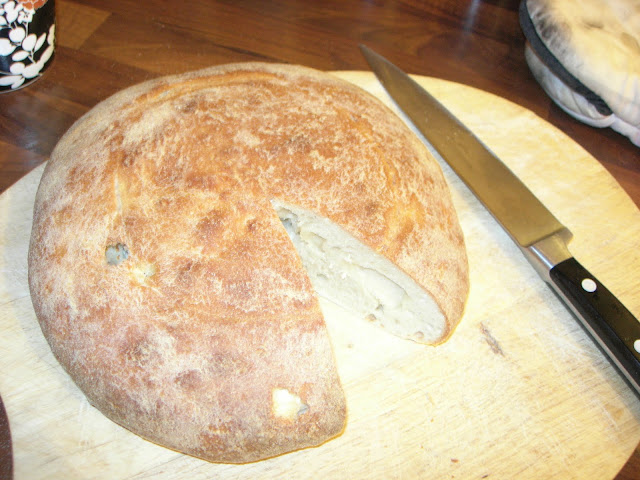 Baking bread. I've been an eager convert ever since we got our first breadmaker three years ago. But around at Mike and Elena's in December, I read their copy of Leith's Baking Bible. Yum. Three pages of detailed instructions on making one loaf of sourdough bread; the adjectives were inspiring promising thick crusts and intensely chewy insides. And there's no need to add yeast; it gets captured from the air around you.

So Mary found me a copy for christmas and Freddie and I have been busy successfully experimenting ever since. And the breadmaker that was once my pride and joy is relegated to a five minute knead every now and again.

So what does it involve, making these loaves, you ask? It takes about five-ten minutes a day to have a 1kg loaf every three days. Here's what you do: END_OF_DOCUMENT_TOKEN_TO_BE_REPLACED

This year we stayed in London. All our neighbours got together on the Sunday beforehand for a good laugh and pot-luck.

Then Christmas took off in earnest for Freddie with a trip to see Santa at a shopping centre on Christmas Eve, although as you can see from the photo, his excitement was replaced by shyness as soon as he got to see the white-bearded man in the red outfit. END_OF_DOCUMENT_TOKEN_TO_BE_REPLACED

Couple of months ago our Audi A4 estate got broken into; we were woken up at 1am by the cops who informed me a chap was caught attempting to extricate his swag bag from the clutches of the rear windscreen wiper.  Mr Not-the-sharpest-tool-in-the-box got a fortnight behind bars; our car was scrapped; and we got as much as we paid for the car we've had for the past eighteen months back from the insurance company.

So today Freddie and I hiked up to Edgware to get a replacement; it's a smashing old Volvo that does 50+ miles per gallon (that's 5.6 litres per 100km) with dead low mileage, an old tapedeck and a sunroof. Yay! It will be easier to move house when we need to, and we'll be able to hit the ground running in the country again…

Freddie turned three on the 30th of November but we didn't get around to a birthday party until last Saturday. And it's taken me this long to get the photos and videos from the four cameras together! We had a great day, loads of food and presents for the birthday boy.

Thanks to everyone for the well-wishing, cards, presents and effort for him; he really felt special. Here's a couple of photos and a video of the blowing-out-the-candles moment and bouncing-on-the-bed hijinks:

Last weekend was a long one, and the family scooted off to visit Mary’s cousin and comrade in overseas fun, Bridget, from way-back in Ireland. Close to Mullingar, west of Dublin. She has a large and welcoming family, with a home to match. The weather was ‘on and off’ but we were able to make the best of it, visiting my friend Kat in Dublin on the Saturday and another of Mary’s friend’s, Sharon and her three sons on Sunday in Celbridge. In and out of the hen house, chasing the kittens, swimming in the nearby hotel’s pool, visiting swans on the lake, and exploring Bridget’s husband Jimi’s current building project all totted up to a swell break for us all.

Anyhow, enough burbling, here are some snaps. Sorry we didn’t get a chance to get everyone in – they’re probably sighing with relief anyhow ;o) Fullscreen button is now bottom left….

I took Fredde to the Natural History Museum today. He loved it, there’s loads of creepy crawleys, stuffed animals, all manner of rocks and a dark dinosaur wing. You could spend hours pootling about the place, and Freddie got hooked on loads of it. The ushers had to ask us to leave because it was closing. Anyhow, here are some great photos and a T.Rex video (don’t forget to click on the ‘full screen’ icon, bottom right):

It being mid-August, we decided to take a weekend in the country before the summer ends. It was off to West Sussex this time to stay in a cosy B&B in a 550-year old medieval house called Glebe End in a little village called Warnham. It’s a totally gorgeous house and the price is good so we’d recommend it to Londoners as it is only around 90 mins drive away.

Liz Cox, the landlady, was a bit of a character – old style plum-in-mouth accent and very charming along with her two sheepdogs Betsy & D.J. She cooked a fine breakfast to boot.

The village itself and the surrounding countryside is stunning. One of the highlights was walking into the Greets, one of the two village pubs, and finding an ancient low-ceilinged bar with no seats. Instead there were loops hanging from the ceiling so you could grab one if you felt a bit unsteady or if you just fancied a prop – exactly the same style as you find on London Underground.

After dropping our bags on Saturday and pootling about Horsham we headed off down to Worthing which is on the coast, but unfortunately only Freddie was very impressed with it. He enjoyed the time spent on the windy stony beach with Adam while I read a book in the car.

We decided we liked the West Sussex countryside much better and spent the next day in woodland where we walked and picked blackberries and took pictures of the mushrooms we came across. We also found some hungry carp in a lake beside a fancy manor and Freddie enjoyed feeding them some bread (the fish, not the manor owners) which caused them to get into a bit of a frenzy.

Here’s the photos, none of me, typical ;o)